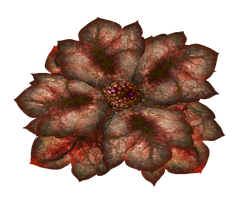 The bloodleaf is a consumable item in Fallout 4.

A red, semi-aquatic cluster of leaves found on bloodleaf plants in lakes, rivers, and other bodies of water. The plants have long roots alongside the broad-leafed red flowers, appearing commonly in groups of up to ten in the northern Commonwealth.[1] A research report conducted by the Brotherhood of Steel advises to avoid consumption due to radiation, despite the leaves being edible with possible regenerative effects.[1]

Bloodleaf can be used as an ingredient in squirrel stew, produced at cooking stations for a 2% XP gain for 2 hours. It can also be used to make Skeeto Spit or Ultra Jet at a chemistry station. For the Chemist perk, this item is treated as a chem; the HP gained from consuming it will increase.

Retrieved from "https://fallout.fandom.com/wiki/Bloodleaf_(Fallout_4)?oldid=3485829"
Community content is available under CC-BY-SA unless otherwise noted.