Fallout 4
“Is this mosquito the product of FEV or radiation?”— Curie

The mosquitoes that inhabited the swamps of Massachusetts were mutated since the Great War and have become a capable predator in the Commonwealth. Around the size of a dog, bloodbugs attack by stabbing their knife-like proboscis into soft tissue. Although they feed upon the blood of their victims, they will also often spray this blood back into their prey's eyes to distort their vision.[1] The bog-standard of bloodbugs, these mutated insects attack in swarms, piercing their prey with a needle-like proboscis and feeding on their blood.

Bloodbugs appear to be roughly two feet in length from the head to the tip of the abdomen. Bloodbugs possess muddy brown coloration which allows them to camouflage effectively into the environment of the Commonwealth. Like their pre-War ancestors, bloodbugs possess six long double-jointed limbs, one pair of finely-veined wings and a long, pointed proboscis that extends from between two compound eyes.

The proboscis is the bloodbug's primary means of assault, sinking it into prey almost like a syringe and inflicting minor-to-intermediate radiation poisoning on the victim. The proboscis can be collected by the Sole Survivor upon the bloodbug's death.

Bloodbugs latch onto their prey in an attempt to drink their blood. The insect then becomes engorged with the victim's blood and can spit the contaminated blood back at its target for a large amount of radiation damage, which suggests that radiation is transmitted from the mutant to the victim. While these mutated mosquitoes can punch their proboscis through any kind of regular armor, it's not powerful enough to penetrate power armor. Should they find themselves faced with such heavily armored prey, their range of available attacks becomes limited to largely ineffectual stings and their acid spit, should the target be out of melee range.

Bloodbugs are often encountered feeding on deceased brahmin. Coming across the exsanguinated, gray-skinned husk of a dead brahmin whose body is covered in oversized stings is a significant indicator of knowing there are bloodbugs nearby. Bloodbugs near certain parts of the coast are occasionally seen feeding on dead whales.

Bloodbugs, like bloatflies and radscorpions, have a propensity for swarming tactics. Once they are alerted to their victim's presence, they will spread out, surround their prey and attack from multiple directions. This, coupled with their erratic evasive movement while under fire, their good camouflage and their slender silhouette, makes it difficult to keep track of and kill them all before at least some of them get into melee range. However, should the majority of the swarm be destroyed before it reaches its prey, the survivors will often retreat. Usually, they will regroup and attack again, but sometimes they will flee for good without returning.

Another habit bloodbugs share with bloatflies and especially radroaches is their clinging to trees and structures, as well as walls or the ceiling while indoors and unaware of an enemy's presence. This can result in a nasty surprise when the player character enters a seemingly empty room or subway station and suddenly finds themselves in the middle of an entire bloodbug swarm. Companions will usually notice the bugs and remark upon something not being right or enemies being nearby, although they won't open fire until the creatures make the first move.

Some bloodbugs near dead brahmin can be found with their blood sac already full of the brahmin's blood. The bloodbug's enlarged blood sac can be targeted more accurately due to its size.

The vampiric bloodbug can be found in various locations throughout the Commonwealth. It is the strongest variant of these creatures.

The bloodbug model was modeled by Jonah Lobe.[2] It was the first insect designed and built during preproduction, giving the team a chance to prototype AI behavior for flying creatures.[3] 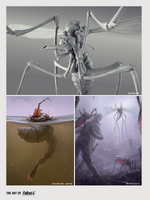 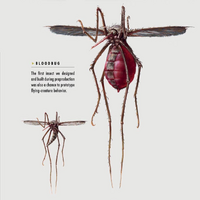 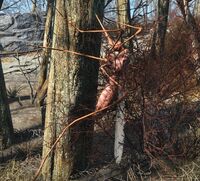 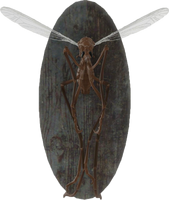