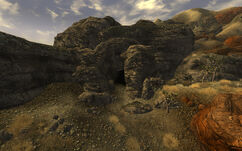 “Night Stalkers are amongst the most fearsome beasts you'll ever face. They're also hard to find, but I know of a nest at a cave near Bitter Springs.”— Red Lucy

The bloodborne cave is a location east of the Brotherhood of Steel safehouse and northwest of Bitter Springs in 2281.

Known for the red-hued sandstone rocks flanking it, the cave lies in a sandstone range similar to Red Rock Canyon, and has many dangerous packs of wildlife surrounding the entrance. A large number of night stalkers, including the legendary night stalker, reside in the cave. It has a single interior section.

There is a campfire near the end of the cave, in the room with the legendary night stalker. Here the Courier can find a key. This key opens a Very Hard locked gate on the north side of the cave. Behind the locked door lies a significant amount of loot. Right beyond the gate is an easy-to-miss trip wire which triggers three grenade bouquets. This trap can be deadly, as the grenades drop in a tight corridor.

Past the campfire are several skeletons, often accompanied by loot including weapons and ammunition. The mushrooms on the ground may conceal the loot.

The bloodborne cave appears only in Fallout: New Vegas.

Loot behind the Very Hard locked gate, note the tripwire that drops a grenade bouquet

Pile of night stalker eggs
Add a photo to this gallery
Retrieved from "https://fallout.fandom.com/wiki/Bloodborne_cave?oldid=3432191"
Community content is available under CC-BY-SA unless otherwise noted.