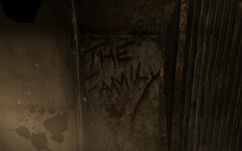 Graffiti written by The Family

“Don't you understand me? I killed them, okay?! My mother and father are dead because of me!”— Ian West

Blood Ties is a Fallout 3 side quest. It is also a Xbox 360 and PC achievement, and a PlayStation 3 trophy.

The quest can be started by speaking with Lucy West in or around Moriarty's Saloon in Megaton, by talking to Evan King in Arefu or by reading "Regarding the Arefu Incident" in the Family's terminal in the Meresti Metro Station.

Lucy West asks the Lone Wanderer to deliver a letter to her family in Arefu. If the quest is accepted, Lucy will give the player character an envelope, and mark the location of Arefu on the Lone Wanderer's Pip-Boy 3000.

Evan King will toss a grenade as the player character approaches Arefu. King then apologizes and explains that the town has been under repeated attacks by The Family. Evan will ask the Lone Wanderer to check the Ewer, Schenzy, and West residences to make sure everyone is all right (this starts the quest for the player character if he/she did not pick it up from Lucy).

When checking in on the residents, the Lone Wanderer discovers that the Ewer and Schenzy families are safe, but further investigation finds the dead bodies of Lucy and Ian's parents; further examination shows they have bite marks on their necks (requires 30+ in Medicine skill) with no significant blood amount on their bodies (50+ Medicine skill), that the marks are from human teeth (70+ Medicine skill) and that there is train yard residue on the bodies (90+ Medicine skill).

When the player character reports back to Evan King, he will ask about Lucy's brother, Ian West. Upon discovery that he is missing, Evan will mention having seen Ian with Vance, the leader of the Family. He will also add three markers to the map if prompted: Hamilton's hideaway, Moonbeam Outdoor Cinema and the Northwest Seneca station - none of which are correct, though Murphy in the Seneca Station will tell the player character to follow the sewers if they ask about the Family. If the player character noticed the train yard residue, it will be possible to ask Evan if there are any train yards in the area. This will allow Evan to add a marker for the correct location, Meresti trainyard.

If one has the Scoundrel perk, before finding Ian, one can return to Lucy and demand caps before going to look for her brother. She gives 100 caps, with no Karma penalty.

The Family resides in the Meresti Metro station which can be reached easiest via the tunnels under the Meresti trainyard, or much more inconveniently, through the tunnels found under the radioactive barrels in the back of Murphy's place in Northwest Seneca station. There are various traps, including bear traps, frag mines, a rigged baby carriage and an assortment of tripwire traps that set off rigged shotguns, grenade bouquets and even a pitching machine.

If the player character enters by Northwest Seneca Station, they will find Murphy's chem lab operation. To the right, in the back of his office one will find a hatch leading to the Meresti service tunnel. The player character will encounter two mirelurks there. After going through the cave one will enter the old train trail, then make a left at the first train wreck with the dead mirelurks. The debris here conceals many traps: frag mines on either side, two bear traps in the middle. Heading left comes to two miniature tripwires between the carriages and walls. The first has a rigged shotgun straight ahead, the second a heavy weight that falls from the ceiling.

The front gate to the Family's hideout is guarded by Robert, who will allow the player character into the Family's home for 100 caps, or for free if the Lone Wanderer has Lucy's letter for Ian. The player character can also gain peaceful entrance by passing a speech check with Robert, or by using a speech option from the Cannibal perk, which also opens up many more speech options making the whole quest much easier. Alternatively, the player character can kill Robert and hack the terminal adjacent to his post to unlock the station door, although this and the option of sneaking past Robert will turn the family hostile.

The next task is to locate Ian West to determine if he is still alive. Several members of the Family will reveal Ian's location and the password to unlock the room where he is meditating. These are the possible scenarios:

Talking to Ian will confirm he was not kidnapped but voluntarily joined the Family after killing his parents. After a childhood encounter with a threatening wastelander, Ian has craved human flesh and blood, even that of his own mother and father. One is then faced with the choice of convincing Ian to leave - which requires either the letter from his sister Lucy or passing a Speech check if Vance is still alive - or leaving him with the Family.

Ian's decision must be relayed to Evan King back in Arefu. Depending on which choice Ian made, the appropriate parties will react with enthusiasm or disappointment. Reporting the news of Ian's decision to King will result in a sizable amount of good Karma regardless of Ian's ultimate choice. After Ian's decision, the Family and the residents of Arefu are considered to be the same faction even before the deal is made with Vance.

Vance may also be convinced to either not attack or to defend Arefu if he and the family are not already dead. If one simply asks Vance to stop attacking Arefu, he will agree. Through a successful Speech, Medicine, or Intelligence check, the player character can also convince Vance to enter into a deal to use blood packs instead of attacking the residents of Arefu. Regardless of the conversation choice, Vance will award the player character with the Shishkebab schematics, after the initial conversation about the deal is over.

If one has brokered a deal between the family and Arefu, they can return to Vance after the deal is relayed to King and ask to be shown the ways of the vampire. one will then be taught to drink blood and awarded the Hematophage perk which modifies blood packs to heal 20 HP instead of 1 HP.

If one suggested the Family guard the town in exchange for blood, Alan will be dispatched to Arefu, fulfilling their end of the deal. At that point, one can enter Alan's residence in Arefu (located at the entrance to town, near the Brahmin pen) to find a copy of Pugilism Illustrated on a table in the corner.

After successfully dealing with the problem of Arefu, each of its inhabitants will show their gratitude in the following ways: