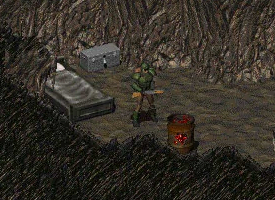 Blondie is a mercenary captain hired by John Bishop in 2241.

Blondie is a rugged looking man who wears combat armor and brandishes a well maintained weapon.[1] He is located in the Mercenaries' cave. His dog tags as well as those of Angel-Eyes and Tuco can be used to open the raiders' safe, as a piece of the lock combination has been printed on each of them.

Stop Bishop's raider band from attacking Vault City: Blondie needs to be killed so that the attacks on Vault City can be stopped.

The only interactions Blondie has with the Chosen One are his battle cries, as he only has combat dialogue.

Blondie appears only in Fallout 2.

Alongside Tuco and Angel-Eyes, Blondie is a reference to Clint Eastwood's character from the spaghetti western trilogy he starred in, specifically The Good, the Bad and the Ugly as the "Good."

Retrieved from "https://fallout.fandom.com/wiki/Blondie?oldid=3072975"
Community content is available under CC-BY-SA unless otherwise noted.