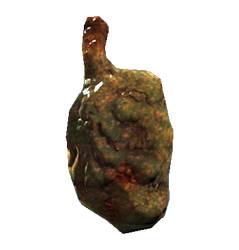 Bloatfly gland is a junk item in Fallout 4.

These glands are part of a bloatfly, a mutated Tabanus genera of biting horse fly. The unique gland enables the bloatfly to balance and maintain speed despite its size.[1] The gland itself may be toxic to consume, as Doctor Duff warns the Sole Survivor not to chew on them, having previously caused one of her students to become ill.[2]

The bloatfly gland can be broken down into its individual components for use in crafting:

Retrieved from "https://fallout.fandom.com/wiki/Bloatfly_gland_(Fallout_4)?oldid=3449927"
Community content is available under CC-BY-SA unless otherwise noted.