Fallout 4
“One of the Wasteland's most disgusting creatures, the Bloatfly shoots its maggots as projectiles, and often explodes upon death.”— Fallout 4 loading screen

Bloatflies are creatures found in the Commonwealth in 2287.

An example of the mutations caused by the Great War, the bloatfly is an evolution of either the Musca domestica (common housefly)[1] or Tabanus genera of biting horse fly.[2] Tentatively classified as part of the Tabanidae family in the order Diptera, class Insecta, phylum Arthropoda and kingdom Animalia by the Enclave, it is a major divergence from its evolutionary forebears.[2][3]

The standard bloatfly has a green and brown carapace and is significantly larger and more tenacious than its predecessors. Its size inhibits previous flight characteristics and agility, making it impossible to feed like pre-War horse flies did. Instead, it uses its engorged stinger and pupae gestating within its abdomen to incapacitate prey.[2] The stinger is capable of launching mature larvae with a barbed sting at the end. These latch onto the target and deliver a neurotoxin capable of incapacitating larger prey, allowing the bloatfly and its larvae to feed.[2]

Its neurotoxin is ineffective against humans and larger targets, causing only localized necrosis.[2] As a result, the bloatfly serves as prey rather than predator among wastelanders who utilize its meat for food.[2] Bloatflies can resort to scavenging in situations where prey or other sources of sustenance are scarce.[4] It adapted to its enlarged size with a unique gland that enables it to balance and maintain speed despite its size.[5] The gland itself may be toxic to consume.[3][6]

Bloatflies attack at long range by peppering their prey with spine-bedecked larva launched from its abdomen. They tend to attack in groups, and may pose an additional threat based on their ability to attack from a distance. Bloatflies in the Commonwealth will crawl on surfaces and display more aggression than their counterparts in other wastelands. Although they generally attack at long range, at times they will fly close to their target. They can be found near bodies of water and throughout swampland, often attacking alongside bloodbugs and stingwings.

The standard variant, common throughout the Commonwealth. Usually found in groups of up to three.

A slightly stronger variation, likewise frequently traveling in a group. Featuring a darker carapace, this variant is sometimes seen with other creatures such as stingwings or bloodbugs.

A bloatfly variant with a higher number of Hit Points. Can be found alone or in a group of other bloatflies or with different types of creatures.

Glowing bloatflies are a hardier variant whose body emits a green glow caused by massive radiation exposure. Upon death a glowing bloatfly will explode with irradiated matter causing radiation damage to nearby life forms and may even damage and irradiate nearby crops giving them a radioactive glow. 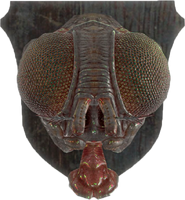