Bloatflies are insects in the Capital Wasteland in 2277.

This section is transcluded from Bloatfly. To change it, please edit the transcluded page.

An example of the mutations caused by the Great War, the bloatfly is an evolution of either the Musca domestica (common housefly)[1] or Tabanus genera of biting horse fly.[2] Tentatively classified as part of the Tabanidae family in the order Diptera, class Insecta, phylum Arthropoda and kingdom Animalia by the Enclave, it is a major divergence from its evolutionary forebears.[2][3]

This section is transcluded from Bloatfly. To change it, please edit the transcluded page.

The standard bloatfly has a green and brown carapace and is significantly larger and more tenacious than its predecessors. Its size inhibits previous flight characteristics and agility, making it impossible to feed like pre-War horse flies did. Instead, it uses its engorged stinger and pupae gestating within its abdomen to incapacitate prey.[2] The stinger is capable of launching mature larvae with a barbed sting at the end. These latch onto the target and deliver a neurotoxin capable of incapacitating larger prey, allowing the bloatfly and its larvae to feed.[2]

Its neurotoxin is ineffective against humans and larger targets, causing only localized necrosis.[2] As a result, the bloatfly serves as prey rather than predator among wastelanders who utilize its meat for food.[2] Bloatflies can resort to scavenging in situations where prey or other sources of sustenance are scarce.[4] It adapted to its enlarged size with a unique gland that enables it to balance and maintain speed despite its size.[5] The gland itself may be toxic to consume.[3][6]

Individually, they do not inflict much damage, but in swarms, bloatflies can be a moderate threat to low-level player characters (especially companions). Their carapaces are not particularly effective as a protection against any type of weapon. However, due to their fast and erratic movement as well as small size, compared to other denizens of the wastes, bloatflies are a challenge to shoot without V.A.T.S. They have a slow speed of pursuit, making it easy to escape from.

Bloatflies are large, mutated blowflies. In significant numbers, they pose a minor threat to high-level player characters, but can prove lethal to those at a low-level. 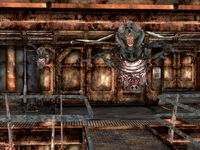