Bloatflies are mutated insects living in the Mojave Wasteland, Zion Canyon, and Big MT in 2281.

They are usually found around graveyards, buildings, or pools of radiated water in groups of three to five. Weak by nature, their attacks have very little effect. Their main attack consists of spiked larvae launched from a distance. They are relatively easy to kill in close combat, even should the attacker lack any substantial skill in Unarmed or Melee Weapons, as they have very few Hit Points.

They can be difficult to hit with a ranged weapon without the assistance of V.A.T.S. as they tend to flit about in sporadic patterns. However, ordinary bloatflies will not initiate combat themselves unless the player approaches close to their vacinity.

The normal variant with all of the attributes noted above.

A legendary variant can be found in Big MT, at the mysterious cave. It is considerably larger than a normal bloatfly, and has a pale green aura, making it easy to spot in the cave. It also flies much higher, making striking it with melee weapons difficult or entirely impossible. Unlike normal bloatflies, it fires a highly damaging (300 damage, equal to that of deathclaw alpha male) plasma-like projectile from its abdomen, the strength of which is such that even the strongest of attackers will be killed after just a few shots. When killed, it explodes in a manner similar to a plasma grenade, leaving a pile of goo instead of a corpse. Its brain can be targeted in V.A.T.S., and if crippled, will cause it to frenzy. It has twice the health of the legendary deathclaw and deals nearly twice the damage. 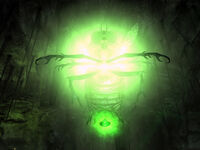 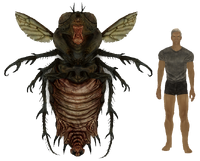