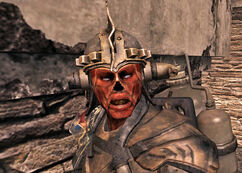 “They bear false versions of Legate Lanius' mask, the one Caesar fashioned for him. Thought it was an insult at first.... know better now. It's shaped from Divide metal, not with care and strength, but with hate. Keeps them anchored. Crude, effective - like the blades they carry, distant mirrors of their Legate. A symbol they can hold on to - while the Divide tears at them.”— Ulysses about the masks worn by the marked men leaders

Blister is the first of four unique marked men encountered in the Divide in 2281.

Blister is a hunter residing within the marked men base. He is with a group that will ambush the Courier upon detonating the warhead blocking the entrance. His health and combat skills are higher than those of a normal marked man. As befitting his name, he fights using a flamer, raining blistering heat upon his enemies.

Unlike the rest of the unique marked men, Blister has five tagged skills. He also has the lowest HP among all of them.

Retrieved from "https://fallout.fandom.com/wiki/Blister?oldid=3324748"
Community content is available under CC-BY-SA unless otherwise noted.