All My Friends Have Off Switches
Field Research 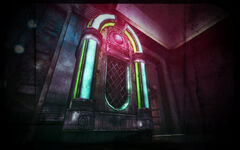 “You heard of Doc Boney? Sang with the staff band till his wife caught him in bed with a nurse. Now he haunts the Med Center, still singing the blues.”

Blind Diode Jefferson is an automated personality in the Big MT in 2281.

Blind Diode Jefferson was forced offline when Dr. Mobius abandoned The Think Tank and left for the Forbidden Zone. Once his personality backup is retrieved from house #108, he speaks with a slow drawl, similar in style to a stereotypical Deep South Blues musician. When left alone, he may continue to ramble, spouting mostly-useless advice and anecdotes of by-gone times. When asked if he can play music, he says that he used to before Dr. Mobius took out his music drives - hence exacerbating his feeling of 'the blues'. Mobius used him to change the frequency of sonic emitters.

This character is strikingly similar to the famous Texas Blues artist Blind Lemon Jefferson, with a diode simply being a component of a jukebox, just like a lemon (bitterness) could be seen to be a component of the blues.