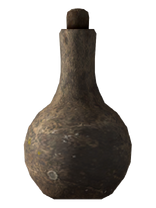 Bleak venom is a consumable item in Fallout: New Vegas.

Bleak venom is a lethal cardiotoxin that causes considerable damage to a target, dealing 15 damage per second during a span of 10 seconds. Like all poisons, it can be applied to any Unarmed or Melee Weapons (including thrown weapons, such as the throwing spear), allowing the player character to envenom a target on a successful hit. Note that one dose of poison lasts for one strike or thrown projectile only.

Bleak Venom is the second most deadly of the poisons available in the main game in terms of base damage, second only to the lethal variety of Cloud Kiss, making it extremely useful for dealing with high-level and heavily-armored foes as well as those regenerating hitpoints due to radiation or some other effect.

Retrieved from "https://fallout.fandom.com/wiki/Bleak_venom?oldid=3423964"
Community content is available under CC-BY-SA unless otherwise noted.