Blamco Brand Mac and Cheese is a food item found in Fallout 4.

Blamco Mac and Cheese is a packaged pre-War foodstuff. The box shows a picture of a bomb inside a bowl of mac and cheese, which is repeated on all sides except the top and bottom, which are plain. It has a dispenser on one side of the box for pouring out the product and a nutrition information panel on the opposite side, which is illegible.

The pre-War snack can be crafted with the food processor in the Contraptions Workshop add-on.

Two instances of the pre-War version can be found: 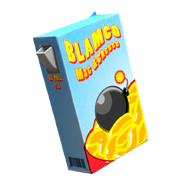