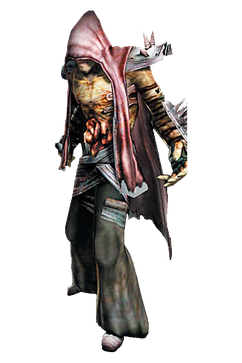 Blake was the high priest of the ghoul cult known as the Church of the Lost which worships and protects the Secret Vault under the city of Los.

Blake was not "ghoulified" by the Great War, but was born after the explosion in the Secret Vault. He was originally a security officer for the vault, but he started a battle with the vault scientists when he deemed that their research was "evil." This resulted in a large explosion which trapped the scientists in the vault's garden. Blake and his officers (along with engineer Giese) were trapped on the surface where they mutated into ghouls, with Blake emerging as their leader.

Blake is unusually large for a ghoul, reaching a super mutant's height if not their bulk. He wears a hood and some bandages, making him appear like an undead demon. He is completely insane and usually says nothing but nonsensical pseudo-religious rants, many of them altered parts of William Blake's songs and poems. His weapon of choice is a large, spiked, sword-like staff.

Confrontation with the Initiate[edit | edit source]

When the Initiate enters Los, he can be heard frequently on the city’s PA system giving sermons to his fellow ghoul fanatics. Before the Initiate, the Brotherhood of Steel paladin Rhombus, along with his men, entered Los and stole the vault's main laboratory keycard from the cult. He and his men fought the cult, but lost to them, so he was captured and taken to Los' torture chamber near the docks and was tortured by Blake for the location of the stolen keycard. Blake even goes as far as to suggest to Rhombus that their two organizations are not so different, as they are both guarding against the more undesirable elements of technology. When the Brotherhood Initiate meets with the captive paladin, Blake enters and the Initiate is forced to kill Blake in order to free Rhombus.

Blake appears only in Fallout: Brotherhood of Steel.

Blake animation
Add a photo to this gallery
Retrieved from "https://fallout.fandom.com/wiki/Blake_(Fallout:_Brotherhood_of_Steel)?oldid=2905977"
Community content is available under CC-BY-SA unless otherwise noted.