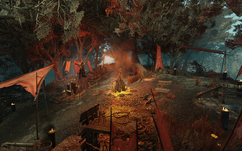 Blake's Offering is a location in the Mire region of Appalachia in 2103. It is located east of KMAX Transmission.

This site consists of defensive structures surrounding a Cult of the Mothman totem. A cooking station can be found under a fallen tree just to the east of the totem. Sage can be found to the southwest of the totem during Exit Sage Left.

Blake's Offering appears only in Fallout 76 and its update Wastelanders.

The Central Totem
Add a photo to this gallery

Retrieved from "https://fallout.fandom.com/wiki/Blake%27s_Offering?oldid=3477329"
Community content is available under CC-BY-SA unless otherwise noted.