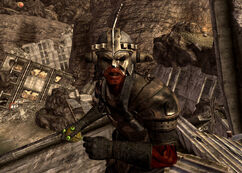 On a roof northeast of Ulysses' Temple

“They bear false versions of Legate Lanius' mask, the one Caesar fashioned for him. Thought it was an insult at first.... know better now. It's shaped from Divide metal, not with care and strength, but with hate. Keeps them anchored. Crude, effective - like the blades they carry, distant mirrors of their Legate. A symbol they can hold on to - while the Divide tears at them.”— Ulysses about the masks worn by the marked men leaders

Blade is the last of the four unique marked men encountered at the Divide in 2281.

Blade is a scout residing near the entrance to Ulysses' Temple in the Divide. His health and combat skills are higher than those of a normal marked man and are on par with those of a companion. True to his name, he is a sword fighter whose primary weapon is the Blade of the West.

Blade moves 15% faster than a normal non-player character and deals 25 extra points of melee damage per hit. He also uses a Stealth Boy, allowing him to get into close melee range without being noticed and preventing him from being targeted using V.A.T.S.

Retrieved from "https://fallout.fandom.com/wiki/Blade?oldid=3324746"
Community content is available under CC-BY-SA unless otherwise noted.