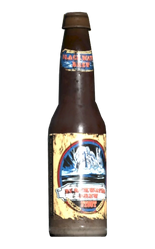 Blackwater Brew is a consumable item in Fallout 76.

A dark, top-fermented stout beer brewed using blight and razorgrain. It increases Strength and Charisma by one while also lowering Intelligence by one.

Similar to other fermentable pre-War beverages, Blackwater Brew is initially crafted as fermentable Blackwater Brew, offering no benefits, inflicting 30 rads, and having a significantly high disease chance of 9% until fully fermented.

It shares its appearance with a standard beer bottle but has a Blackwater Brew label featuring an iceberg floating in black water.

Blackwater Brew can be crafted using the brewing and distilling functionality of Wild Appalachia.

Close up of the label
Add a photo to this gallery
Retrieved from "https://fallout.fandom.com/wiki/Blackwater_Brew?oldid=3378748"
Community content is available under CC-BY-SA unless otherwise noted.