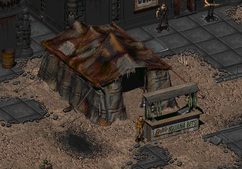 “Too bad, Bob. I'd hate to start singing.”— The Vault Dweller to Bob about his secret

Blackmail Iguana Bob is an unmarked quest in Fallout.

Although Iguana Bob Frazier does business in the Hub, this quest starts in Junktown, where the entrepreneur's supplier resides.

Visit Junktown hospital, climb down the ladder into the doctor's basement and meet the mentally-challenged dwarf worker Gretch. He will not so subtly let slip about being hard at work sorting out some human body parts to send to Iguana Bob in the Hub. It is then quickly realized that there's more to Iguana Bob's iguana bits than meets the eye.

If the Vault Dweller confronts Doc Morbid over it, nothing will happen and they cannot tell the authorities. Attacking the doctor will prompt his two bodyguards, Flash and Cougar, to defend him. Killing the bodyguards has no repercussions. Killing Gretch will result in a -1 Karma loss.

The Vault Dweller then needs to go to the Hub and find Iguana Bob's stand downtown. A high Speech skill is needed to intimidate him and depending on one's Barter skill, Bob can be blackmailed for a large slice of his profits.

It is possible to renegotiate with an increased Barter skill for even more profit. This number can yield virtually unlimited bottle caps, but reputation will decrease accordingly.

Retrieved from "https://fallout.fandom.com/wiki/Blackmail_Iguana_Bob?oldid=3435004"
Community content is available under CC-BY-SA unless otherwise noted.