Blackjack is a card game playable in any of the six working casinos in the Mojave Wasteland. Playing ten hands of Blackjack grants the Courier the Double Down achievement/trophy.

The game begins by each individual being given, or dealt, two cards. One card is hidden, face down, from the other player, while the other is laid face up and visible to all. If one of the players receives a Blackjack, the others' second card will be revealed to determine if they also received a Blackjack. If not, the one who hit Blackjack automatically wins. If one receives Blackjack, they will also receive a bonus payout on top of normal wagered winnings. If both the dealer and the player character receive Blackjack, it is a tie, called a "push" and each player keeps their bet, breaking even, referred to as a "wash."

All casinos in New Vegas use the following rules.

Given neutral Luck (6 or less), a Blackjack will occur between 0.3-5% of the time and the odds still favor the house by a margin of approximately 1.0%.[1] These odds are lower at both Gomorrah and Vikki and Vance Casinos, and even more so at the Atomic Wrangler. Each game is equivalent to a coin flip.

Conversely, with low Luck, the game will be strongly rigged against the player character. The dealer will hit Blackjack far more often, and the statement "You feel unlucky" will appear whenever the game has rigged the hand against them. If one tries to subvert the system by loading after a loss, the dealer will take a minute to 'change out the deck' before they can continue playing.

Blackjack can only be played in Fallout: New Vegas as is mentioned only in Fallout.

At Gommorah and Vikki & Vance casinos the dealer will hit any 17 containing an ace on tables where they must hit soft 17, even if it is not a soft 17, for example a king, a six and an ace.[verified] 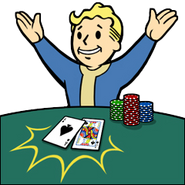 As depicted in Double Down