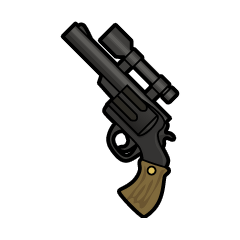 “Blow a Behemoth's head off from half a Wasteland away.”— In-game description

The Blackhawk is a weapon that appears in Fallout Shelter.

The Blackhawk is a double action, swing-out cylinder revolver featured in Fallout Shelter. Dealing a minimum of 3 damage per attack, it has the highest minimum damage output for a handgun in the game. It deals up to 4 more points of damage than the scoped .44.

A high Agility statistic is needed to effectively create the Blackhawk.

The name is a reference to a gun of the same name in Fallout 3, given as a reward for completing the quest Agatha's Song.

Blackhawk card
Add a photo to this gallery

Retrieved from "https://fallout.fandom.com/wiki/Blackhawk_(Fallout_Shelter)?oldid=3122280"
Community content is available under CC-BY-SA unless otherwise noted.