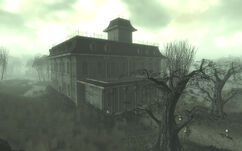 “You're in Blackhall Manor. This isn't a tourist attraction, but I appreciate your good taste. Come, let's talk.”

Blackhall Manor is a location in Point Lookout in 2277, inhabited solely by Obadiah Blackhall.

“Blackhall Manor was the ancestral home of a wealthy family before the Great War.”— Fallout 3 loading screen, Point Lookout

According to Obadiah Blackhall, the mansion has been in his family for generations, dating back to long before the Great War, and is a "fine example of Victorian architecture." He intends to keep this tradition alive, staying in the estate until he dies or the swampfolk get him.

The mansion opens up into a main room with a kitchen on the left and a library on the right where Obadiah sits. In the library is a staircase that ascends to the second floor which has some bedrooms, one with an Average locked safe. After entering the library, on the left is a hallway that leads to a basement where Obadiah performs ritual acts.

Blackhall Manor appears only in the Fallout 3 add-on Point Lookout.

Grisly sight in the basement
Add a photo to this gallery
Retrieved from "https://fallout.fandom.com/wiki/Blackhall_Manor?oldid=3378366"
Community content is available under CC-BY-SA unless otherwise noted.