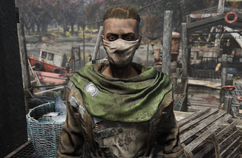 Blackeye, formerly known as Heather,[1] is a member of the self-proclaimed "Blackwater Bad Boys" Raider group at Ohio River Adventures in 2103.

Blackeye worked as a first grade teacher before the Great War, though she says that she was never one for "soft living."[2] She prefers robbing Foundation settlers to disciplining her class over things like turning in spelling homework,[3] especially on a Monday.[4] After joining the Raiders, she lived in the Crater for a time before becoming part of the group sent to establish an outpost at Ohio River Adventures with Fishbones and Gills, where they could coordinate the trade of mirelurk products such as eggs and softshell meat.

Although Gills was later replaced by Bruiser, the group successfuly built up the location. Fisheyes, wanting to keep up morale, gave Blackeye her nickname in reference to an incident where she accidentally hit herself in the face with a plank of wood on her first day.[5] Despite being a talented sharpshooter, she is described as a klutz by Fishbones. Blackeye, Bones and Bruiser now lead the outpost, though they have recently been having troubles with mirelurks attacking the docks.

Blackeye appears only in Fallout 76, introduced in the Wastelanders update.

Full view of Blackeye
Add a photo to this gallery

Retrieved from "https://fallout.fandom.com/wiki/Blackeye?oldid=3378892"
Community content is available under CC-BY-SA unless otherwise noted.