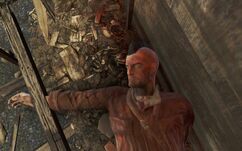 Agent Blackbird was a Railroad operative stationed at Augusta safehouse, deceased as of 2287.[1]

The Railroad agent code-named "Blackbird" was stationed at Augusta safehouse. He had managed to survive an invasion of the compound by a synth raiding party sent to destroy the safehouse and exterminate all of its inhabitants. They quickly overran the facility, indiscriminately slaughtering every agent they found in the process. Blackbird was the only confirmed survivor, and there was a synth residing at the safehouse who became missing in action.[1]

Blackbird appears only in Fallout 4.

Retrieved from "https://fallout.fandom.com/wiki/Blackbird?oldid=3322920"
Community content is available under CC-BY-SA unless otherwise noted.