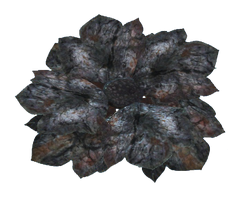 Black bloodleaf is a consumable item in the Fallout 4 add-on Far Harbor.

Black bloodleaf is similar to those found in the Commonwealth, distinguished by a dark ashen color. It is an ingredient used to craft seasoned rabbit skewers at cooking stations for +1 Luck for 30 minutes, chicken noodle soup for +55 rad resistance for 30 minutes and Fire Belly to gradually increase damage at low health.

Retrieved from "https://fallout.fandom.com/wiki/Black_bloodleaf_(Far_Harbor)?oldid=3477308"
Community content is available under CC-BY-SA unless otherwise noted.