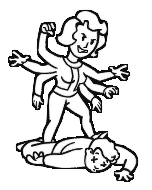 Black Widow is a perk for female player characters in Fallout 3, Fallout: New Vegas, and Fallout 4.

“"Come into my parlor," said the Black Widow. You're charming... and dangerous to those of the opposite sex. Though the gender of the Commonwealth's population is about evenly split, this perk won't affect those sporting a similar undercarriage to you. Don't forget the Intimidation perk; both of these perks in unison allows almost any situation to be handled your way, without (or with) violence.”— Fallout 4 Vault Dweller's Survival Guide description

Black Widow derives its name from the habit of female Latrodectus (black widow spiders) to cannibalize their mates during or after mating. It is also the official FBI designation for a woman who murders her husband(s), usually in a serial fashion and/or for monetary gain.

Due to several scripting typos, in Fallout 4, ranks 2 and 3 provide no actual benefit to pacification success rates with Intimidation.[verified]

Fallout 4 loading screen
Add a photo to this gallery
Retrieved from "https://fallout.fandom.com/wiki/Black_Widow?oldid=3469471"
Community content is available under CC-BY-SA unless otherwise noted.