Play sound
City of the Dead.ogg
“Travelers along the Long 15 have complained to NCR rangers that caravans have been harassed and attacked by fearsome super mutants living in the irradiated ruins of Black Mountain.”— Fallout: New Vegas loading screen hint

Black Mountain is a location in the Mojave Wasteland that serves as a radio station for the State of Utobitha. It can be located on the main map easily by spotting the winding road roughly east of Goodsprings and Sloan. Neil's shack is situated at the bottom of the mountain and marks the start of the road.

Black Mountain, a dominant feature of the area, was unoccupied for over a century after the Great War. A pre-War monitoring station focused on China's satellite network[1], it was the victim of a direct strike, most of Black Mountain’s radar arrays were knocked out immediately. Even though there were valuable materials inside the buildings that surrounded the arrays, the area was so irradiated that no one could survive longer than an hour or so. After the fall of the Master, many of the first generation super mutants headed east. At Black Mountain, they were able to find a place to set up a camp where they could avoid most of the world. It took some time for the super mutants to settle in and repair the equipment at the array, but they were finally able to enlist the help of some ghouls in order to make the array operational.

Over time, nightkin and the more thuggish second generation super mutants trickled into Black Mountain and this eventually caused problems. The de facto leader of the community was Marcus, from Broken Hills. Due to the influx of mentally unstable super mutants, including one particular nightkin named Tabitha, Marcus was pushed out of the group at Black Mountain. He left with a small group of (mostly first generation) super mutants, ghouls, and friendly humans who went on to found Jacobstown. This left the nightkin and second generation super mutants to fend for themselves. Within weeks Tabitha progressively turned the satellite array into a fortress against any and all outsiders. She hallucinates regularly and has convinced the other super mutants (especially the less intelligent second generation) that only she can see the threats against them, due to her “magic eyes” (which are actually a pair of oversized child sunglasses which, of course, she won’t let anyone else touch).[2]

On the road to Black Mountain, there is an overturned satellite dish that is used as a makeshift camp. It contains several trunks, two of which contain several hundred caps. There is also a transceiver where you can pass a 75 Speech check to get Tabitha to declare death to all 'Dumb-Dumbs', after which the transceiver will stop working.

When entering the radio facility via the road, the closest building to the player is the prison building. Inside there will be an imprisoned ghoul mechanic named Raul Tejada who is also a potential companion. As the door to his room is locked, the player must either have a Science skill of 100 to hack the nearby terminal, a key to open the door or by accessing the second terminal near the building's entrance and reading Entry 6. This gives the courier the password, which is 123456789, to unlock the door without hacking the terminal.

The storage building is located between the prison building and the broadcast building, and it contains several random items, a Nuka-Cola vending machine, locked chests, a note written by Tabitha and a broken Mister Handy robot by the name of Rhonda (requires 60 Science to fix).

The broadcast building is at the far end of the property and is identifiable from the single satellite dish on the roof. The building is two floors high and has two doors on the ground floor, one of which is inaccessible from the outside. Once entering the building, the other door can be accessed, it leads to a staircase which then leads to Tabitha's room. Tabitha's room key is needed in order to access her room, it is located underneath the staircase. The door to the first floor inside the fence can be interacted with from the outside, potentially granting access to the top floor whilst bypassing most of the enemies.

Black Mountain is based on real world location Black Mountain within the Sloan Canyon National Conservation Area near Henderson, Nevada. 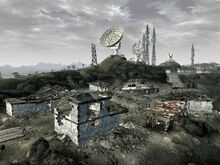 Retrieved from "https://fallout.fandom.com/wiki/Black_Mountain?oldid=3155279"
Community content is available under CC-BY-SA unless otherwise noted.