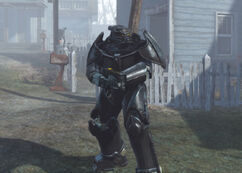 “I used to believe the Enclave was here to protect the ideals this country was founded on. Now I realise

that it couldn't be further from the truth.”— Devil's terminal

The Black Devil is a mentioned only character in the Fallout 4 Creation Club content "X-02 Power Armor."

The Black Devil was a former Enclave military officer and member of the Enclave special forces unit called Devil's Hand before he deserted in 2277, believing that their mission was flawed and being overridden with guilt from the people he killed in the Enclave's name. He stole a suit of X-02 power armor and left for the Commonwealth where he made an outpost for himself underneath the Boston Police rationing site.

While scavenging, he came across a holotape for a local radio station show on a pre-War Hubris Comics communist fighting superhero known as The Black Devil. This inspired him to use the name of the superhero and use radio signals to locate and aid settlers who are in need of help. Eventually, he grew too old to continue as "The Black Devil" and sealed his armor and weapons within his bunker. He left a note behind within his bunker telling anyone who stumbles upon his bunker to deactivate his radio signals as the songs on them bring back old memories.

By 2287, a unit of Enclave remnants were sent to kill the The Black Devil and retrieve his X-02 power armor. The Enclave remnants could not locate the rogue soldier but they eventually discovered the location of the X-02 power armor as well as The Black Devil's underground hideout. However, the Sole Survivor beat them to the armor and managed to kill the members of the Enclave unit.

The Black Devil is mentioned-only in Fallout 4's Creation Club.

Retrieved from "https://fallout.fandom.com/wiki/Black_Devil?oldid=3265374"
Community content is available under CC-BY-SA unless otherwise noted.