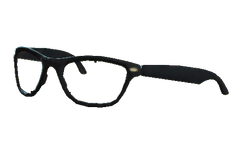 The black-rim glasses are a piece of eyewear in Fallout 4.

Like the fashionable glasses, the black-rim glasses are one of few eyewear pieces that give a bonus to Charisma, allowing for better vendor prices and higher chance of passing Speech checks.

The black-rim glasses appear to be based on Ray-Ban Wayfarer sunglasses, originally released in 1952.

Add a photo to this gallery
Retrieved from "https://fallout.fandom.com/wiki/Black-rim_glasses_(Fallout_4)?oldid=3048429"
Community content is available under CC-BY-SA unless otherwise noted.