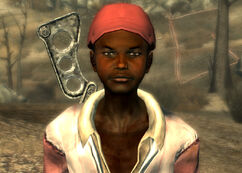 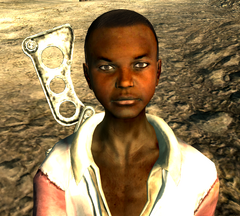 Biwwy, or Billy, is a young boy with a slight speech impediment, which makes it hard for him to pronounce the L and R sounds. He used to be on the scavenging team in Little Lamplight, but was recently kicked out of it because none of the other kids could stand being around him. He's still generally avoided by most and leads a slightly sad, lonely existence, lurking in the alcoves of the Great Chamber and playing with his Wazer Wifle.

Biwwy (or Billy) doesn't seem to have any friends, as everyone finds him annoying, possibly because of his speech impediment and apparent hyperactive nature.

Biwwy (or Billy) wields a unique laser rifle called the "Wazer Wifle" which can be bought from him for 500 caps or 250 with sufficient points in the Barter skill. If one has the Child at Heart perk, the Wazer Wifle can be obtained for free.

Biwwy appears only in Fallout 3.

There is a glitch in which Biwwy (or Billy) is found in the nearby pool of water, unable to be engaged in conversation, you can shoot at him through the water and cause him to flee leave and then come back and the bug will be fixed. [verified]

Biwwy concept art
Add an image to this gallery

Retrieved from "https://fallout.fandom.com/wiki/Biwwy?oldid=3125019"
Community content is available under CC-BY-SA unless otherwise noted.