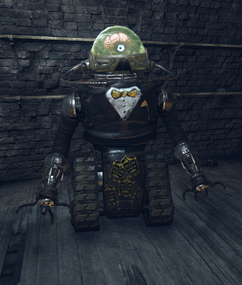 “Your continued studies will lead you to a notorious speakeasy, introduce you to Biv—Appalachia's tipsiest robot, and teach you to craft the illicit Nukashine using the all-new Brewing Station.”— Inside the Vault: Wild Appalachia Preview: Brewing and Distilling

Biv E. Ridge[1] is a drink tester robobrain operating in Appalachia in 2102.

“Those of you looking to add these and other drinks to your mixology repertoire can quench your continuing thirst for knowledge by regularly returning to Biv. Each day you speak with Biv, you'll receive one of two new repeatable daily quests at random. The first will teach you new Brewing and Distilling recipes every time you complete it, and the second will put your taste buds to the test as you experiment with the dubious effects of various drinks. Get ready for a long night.”— Inside the Vault: Wild Appalachia Preview: Brewing and Distilling

Biv is a drink tester robobrain found in Big Al's Tattoo Parlor. Biv was acquired by Lewis, whose mother worked for General Atomics International before the Great War. Whether Biv was acquired legally was never explained by Lewis to Judy Lowell or the rest of Eta Psi.[2]

Lewis planned to use Biv to test Nukashine.[3] This was likely the best course of action, as a human who consumed that amount of alcohol from each drink would die from alcohol poisoning. It is unclear as to whether Biv's drunken manner of speech is a result of alcohol taste-testing, or if he was originally programmed to always sound a little intoxicated.

Biv appears only in Fallout 76, introduced in the Wild Appalachia update.

Retrieved from "https://fallout.fandom.com/wiki/Biv?oldid=3279387"
Community content is available under CC-BY-SA unless otherwise noted.