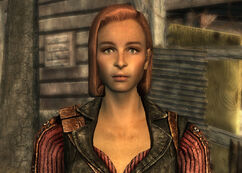 “This is lame. I'm going to sit in my room and think about death.”

Bittercup is one of the citizens of Big Town in the year 2277.

Apathetic, self-involved, and rebellious, Bittercup is one of the troubled young characters that live in Big Town. She spends time worrying about what dark clothing to wear and applying homemade makeup often at the expense of better guarding the town against attack. Many of the other residents of Big Town seem fed up with her, but there is little they can do about it, with the threat of super mutant and raider attacks being a more pressing concern.[1]

Through dialogue, it is revealed that Bittercup has been romantically involved with most of the males in Big Town at one point or another, but it is remarkable that she does not seem to take any of their interests in a physical way. She had a romantic interest in Pappy, whom she left after arriving in Big Town, believing that he was a liar. She then got involved with Flash, who snapped a short time afterward because he couldn't stand her teasing. She claims she then had a relationship with Timebomb; however, he claims he doesn't remember this, since an injury put him in a coma.

Retrieved from "https://fallout.fandom.com/wiki/Bittercup?oldid=3131149"
Community content is available under CC-BY-SA unless otherwise noted.