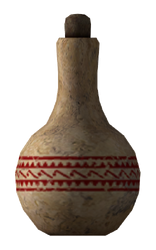 “History? Cures a wound, leaves the bitterness that caused it. The Twin Mothers were always about lessons.”— Ulysses

Originating from Twin Mothers,[1] bitter drink is a useful healing drink primarily carried by legionaries and is regularly consumed by wounded soldiers on the Legion's long forced marches. The drink is known for its bitterness, so much so that it needs to be drunk in one shot; the stomach rejects the concoction after a second gulp. It derives its name from curing the wounds but leaving the "bitter" pain from them.[2] The recipe (and some of its history) is given to the Courier at the end of Lonesome Road by Ulysses if he lives and can be found in the loot crate at the canyon wreckage if he is dead.

Bitter drink can be crafted at a campfire with a Survival skill of 15 and having received the recipe. It requires one broc flower, one xander root and one empty Sunset Sarsaparilla bottle. It is roughly as strong as healing powder, but does not carry the usual side-effects that come from the use thereof - making it a highly effective means for replenishing health outside of combat. At any given level of Medicine skill, bitter drink restores slightly more hit points than stimpaks, although the time required for the full effect is much longer.

Bitter drink counts as a chem, rather than a drink. Despite the fact that it requires Survival skill to craft, its effectiveness is governed by the Medicine skill.

Retrieved from "https://fallout.fandom.com/wiki/Bitter_drink?oldid=3423963"
Community content is available under CC-BY-SA unless otherwise noted.