“Yeah, I was there. I was Captain Dhatri, then. That whole situation was a mess and could easily have been avoided with good intel. The major in charge at the time made a bad call - he thought Bitter Springs was full of Great Khan raiders, so we surrounded the place. By the time any of us realized there were civilians down there - women and children - the shooting had already started. The major froze up at the news, and we couldn't get another word out of him. I took over and salvaged the situation as best I could. For my effort, I was promoted to major. Not quite the way I'd have wanted it.”— Major Dhatri

The Bitter Springs Massacre was an event that took place in the Mojave Wasteland in the year 2278.

In 2278, New California Republic forces surrounded and attacked the Great Khans camp at Bitter Springs. Poor intel led leaders within the NCR to believe the settlement was full of raiders, and ordered their elite First Recon to set up on Coyote Tail Ridge and fire upon any Khans who attempted to flee until they had exhausted their ammunition.[2]

As the attack commenced, members of the main NCR contingent and the First Recon unit did not expect Great Khan women, children, and elderly to be present in the camp, and radioed to command to confirm their orders when these tribal members began to flee the settlement.[3][2] The resulting miscommunication resulted in the massacre of Great Khan non-combatants at the hands of the NCR.

A number of Khans were tracked to Bitter Springs by the NCR as the Republic was first expanding into the Mojave Wasteland. The NCR believed it to be the Khans' base of operations and sent a large detachment of troops to bring the raids to an end.[4] The First Recon Battalion unit, including Craig Boone, were sent to cut off the only escape route, sniping from atop Coyote Tail Ridge.[5][6]

Bitter Springs was not the base of a raider contingent, but instead the primary home of Khan families.[2] When the Khans were attacked, First Recon was ordered to fire on anyone retreating from the area.[2] Radio contact was spotty and members of First Recon were unable to communicate the situation involving women, children, and the elderly for confirmation.[4] Their superiors persisted in the order "fire until you're out of ammunition" to which they obliged.[4] The psychological impact was devastating to Boone, motivating him to leave the New California Republic Army behind.[4][2]

On the command side of the NCR, Major Dhatri was a captain when the massacre occurred. Faulty intel led the commanding officer to believe Bitter Springs was full of raiders, resulting in orders for NCR forces and First Recon to surround and attack.[7] The shooting had already started before they realized women and children were there and the commanding officer froze.[7] Dhatri took command to attempt to salvage the situation to the best of his ability and for his effort, he was promoted to major.[7] He shares with the Courier that it was not the way he would have preferred to receive the promotion.[7]

Bitter-Root has a different perspective about the massacre and the tribe's role in intentionally agitating the NCR to the point of inciting the violence that took place.[8] He describes members of the tribe, including his own parents, as "scum" and "lazy, trumped-up raiders" who attacked innocent settlers for fun, going as far as teaching their own children how to shoot by taking practice shots at NCR soldiers, personnel, and civilians.[9][10]

Bitter-Root recounts that the attack at Bitter Springs was a direct result of the Great Khans carelessness, prolific drug use, and intentional provocation of the NCR as opposed to a slaughter of unaware civilians.[11] He states that although many NCR members blame themselves for the violence, it was the Great Khans who relentlessly goaded the Republic, leading to and being fully responsible for their own demise.[12]

Other Great Khans members remain deeply scarred by the experience, such as another survivor named Chance. Flashbacks show that the NCR was brutal in pursuing their political agenda for conquering the land of the Great Khans at any and all costs.[13] According to Chance, there was no miscommunication with the commanding officers.[13] Instead, he remembers the NCR soldiers converging on the town and opened fire without hesitation.[13] The significant psychological impact has left him broken, experiencing vivid flashbacks, abusing chems, and has not spoken since the event.[13]

The leader of the tribe, Papa Khan is deeply angered by the deaths of the Khans at the hands of the NCR. He states that the Great Khans had been flouting the NCR's demands, carrying out raids under the assumption that NCR's threats of retaliation were simply bluffs.[14] Tensions rose higher and eventually, the NCR tracked what they believed was a large raiding party back to Bitter Springs. Having been harassed continuously by the Khans, the NCR was looking to settle a score and did not expect Bitter Springs to be anything but a raider camp.[14] Fueled by anger and frustration and lacking appropriate intel, NCR command ordered the attack on the settlement which resulted in the deaths of innocent Khans.[14]

The Bitter Springs Massacre is mentioned only in Fallout: New Vegas and in the graphic novel All Roads. 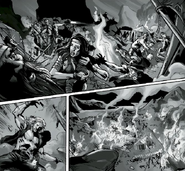