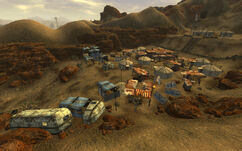 No, Not Much
Climb Ev'ry Mountain
Bitter Springs Infirmary Blues
I Forgot to Remember to Forget 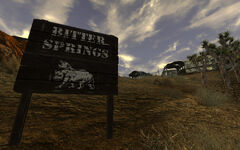 “Let me tell you something, that refugee camp? It's built on the blood and tears of my people. Nobody likes to talk about it, but I remember.”— Oscar Velasco

Bitter Springs is an NCR refugee camp in the far northeastern side of the Mojave Wasteland.

In the past century, Bitter Springs was used by the Great Khans as a semi-permanent community. Due to prolonged conflict with the NCR, the Great Khans were eventually tracked back to Bitter Springs by NCR forces. The assault that rapidly followed was known as the Bitter Springs Massacre due to the NCR’s 1st Recon being ordered to shoot down dozens of young, old, and wounded Khans who attempted to escape through a southern slot canyon from a location called Coyote Tail Ridge. Today, Bitter Springs hosts refugees from settlements Caesar's Legion are razing; a situation that is becoming increasingly untenable.[1]

The camp consists of NCR tents to the north and refugee tents at the south end of the camp. The doctor's tent is amongst the NCR tents facing the refugees and Captain Gilles can usually be found sitting by the campfire at the center. As you approach the area from West by Southwest there are 12 graves, six on each side of the path, containing miscellaneous loot. Great Khan iconography and graffiti can still be found about the camp, illustrating their previous ownership.

Bitter Springs appears only in Fallout: New Vegas and the graphic novel All Roads.

Bitter Springs is based on Bitter Spring, south of the Valley of Fire State Park in Clark County, Nevada.

Camp Regulations
Add an image to this gallery

Retrieved from "https://fallout.fandom.com/wiki/Bitter_Springs?oldid=3110305"
Community content is available under CC-BY-SA unless otherwise noted.