Fallout: New Vegas
“Let me tell you something, that refugee camp? It's built on the blood and tears of my people. Nobody likes to talk about it, but I remember.”— Oscar Velasco

Bitter Springs is an NCR refugee camp in the far northeastern side of the Mojave Wasteland in 2281.

The camp was established on the site of the Bitter Springs Massacre.[1] This event was the result of poor intel and miscommunication between NCR command and First Recon, leading to an attack on a Great Khans civilian settlement, resulting in the deaths of non-combatants.[2][3] Captain Gilles states that the NCR flag at the camp is upside down, intended to be a distress signal.[4][5]

The camp consists of NCR tents to the north and refugee tents at the south end of the camp. The doctor's tent is amongst the NCR tents facing the refugees and Captain Gilles can usually be found sitting by the campfire at the center. Great Khan graffiti can still be found around the area, including a ranger impaled by arrows, captioned "A GOOD RANGER." To the southwest, there are 12 graves, six on each side of a path. Atop one of the graves, a Great Khan spike helmet can be found.

Bitter Springs is a real world location of the same name.

A caravan in the refugee camp 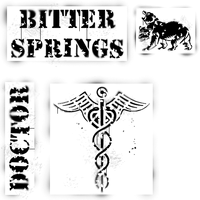 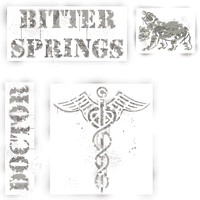