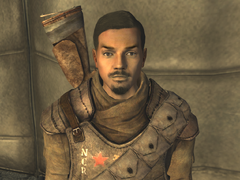 “I like to keep things simple. Just focus on now. That's why they made me a sniper. You let your mind wander back a ways, and you lose sight of what's in front of your eyes. Good way to miss a mark.”

Sergeant Bitter-Root is an NCR 1st Recon sniper stationed at Camp McCarran in 2281.

Bitter-Root is a sniper with the NCR's 1st Recon at Camp McCarran. He is not very friendly and does not like to talk; however, if asked about it, he says that he does not "mean anything by it," and that it's only his nature.[5]

As a child his parents were members of the Great Khans living in Bitter Springs. His father was a sadistic murderer with an alcohol problem who used to take Bitter-Root out shooting members of the NCR, military personnel and civilians alike, since the age of three, later laughing with his fellow drug addicts about the killings. Bitter-Root's mother was an insipid person whose only useful quality to the group seemed to be her being, to quote Bitter-Root's father, "a smokin' hot piece of ass," attempting unsuccessfully to sell her son into slavery on numerous occasions in exchange for jet. He loathed his parents and the upbringing he received.[6]

Bitter-Root was "liberated" from this environment during the Bitter Springs Massacre by the NCR troops and then-Captain Dhatri, who took him in as his son. He claims he does not remember anything about the massacre, but when pressed he admits that after the battle the blood he was covered with was not necessarily all spilled by the NCR and that perhaps he had seized the opportunity to settle some of his own scores.[7]

Bitter-Root's name is part of an old Great Khans ritual; upon reaching the age of adulthood, one is severely beaten in a rite of passage, and if surviving, afterward they choose their own name. Although too young to undergo the beat-down himself, he chose the name Bitter-Root and feels that the Bitter Springs Massacre was his ritual and that the Great Khans "owe" him his name. His choice of name has a double meaning, referring both to his bitter roots as well as to the traumatic event that he considered his rite of passage - the Bitter Springs Massacre.[8]

Bitter-Root's past haunted him long after being taken in by Captain Dhatri, to the extent that he would eventually seek therapy from Doctor Usanagi of the Followers of the Apocalypse. With her assistance, he was able to work through some of his demons.[9]

Upon completing the Driver Nephi portion of the Three-Card Bounty quest by claiming Nephi's bounty, the entire 1st Recon moves to Camp Forlorn Hope to help with the Legion at Nelson. Bitter-Root can then be found in the Camp Forlorn Hope barracks.

Sergeant Bitter-Root is the only active member of 1st Recon that actually sleeps at night. The others simply stand or sit around.