Birds are winged, bipedal animals. They can be seen flying above most settlements in the Capital Wasteland, like Megaton, the Temple of the Union and Evergreen Mills. They can also be seen in the sky in New Vegas. It is unknown how birds survived the nuclear blasts of the Great War, and the majority do not appear to have been affected by the radiation at all, unlike most animals which survived the nuclear apocalypse.

Birds are considered as world objects and cannot be interacted with in any way. They exist only as a distant visual effect. They can be seen circling around certain areas that contain some degree of notability, such as Megaton, Old Olney and the alien crash site.

The generally unhealthier but otherwise mutation-free birds of the Commonwealth display less fear of the player character.

The Institute utilizes synth-UAVs, called "Watchers," to monitor activity within the Commonwealth. Ronnie Shaw comments on "seeing a lot of those Institute crow-things sniffing around." Justin Ayo makes numerous references to watchers, and the Synth Retention Bureau's surveillance monitor banks display footage at elevated angles or "bird's-eye" view. In The Art of Fallout 4, numerous bird and bat concept arts are referred to as "Watcher Sparrow," "Watcher Crow," "Watcher Radgull," etc.

Mutated chickens that can be found on the Island, they have lost almost all of their plumage due to high radiation levels and the radioactive Fog. They are docile and will flee from the player character if approached or shot at, but they can be killed and looted for chicken thighs. 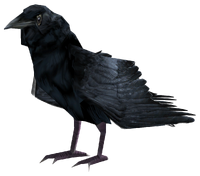 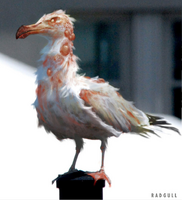 Radgull concept art from The Art of Fallout 4 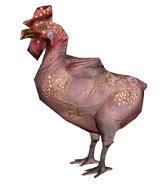 Group of crows in Fallout 4

Cut Radstork from Fallout 4
Add an image to this gallery

Retrieved from "https://fallout.fandom.com/wiki/Bird?oldid=3133451"
Community content is available under CC-BY-SA unless otherwise noted.