The PT-00D biplane is a world object found in Fallout 76.

The PT-00D is a small, pre-War biplane. It appears in many different color schemes, with the primary colors being blue, red, green, and yellow. On the wings are the roundels of the U.S. Army Air Corps, while text found on the left side of the engine lists its model, serial number, and specifications including use of aviation gasoline with an octane rating of 73. The craft was capable of holding a total crew load of 400 pounds.

The PT-00D biplane appears in Fallout 76.

The PT-00D is visually similar to the Boeing Stearman Model 75 biplane, a primary trainer from the late 1930s until the end of World War II. Its designation is based on the PT-series of Stearman models utilized as trainer aircraft utilized by the U.S. Army Air Corps and its successor the U.S. Army Air Forces during this era.

Houses northeast of Monongah Mine crash 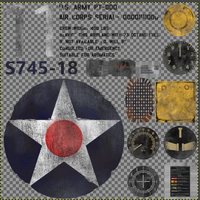