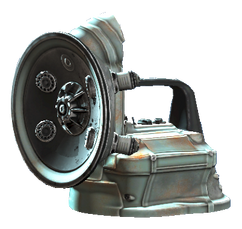 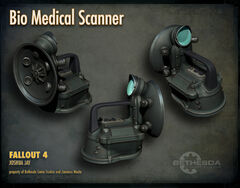 The biometric scanner is a junk item in Fallout 4.

The biometric scanner is a pre-War medical device that was used to diagnose patients. It can be found in hospitals and laboratories across the Commonwealth.

A biometric scanner can be broken down into its individual components for use in crafting:

The biometric scanner is a component of the control console which is built during The Molecular Level, one of 4 signal interceptor parts used to gain access to The Institute.

Biometric scanners can be found in most medical and care facilities, as well as being random drops from turrets and sentry bots and from junk merchants.

They can also be found in the following locations:

Retrieved from "https://fallout.fandom.com/wiki/Biometric_scanner_(Fallout_4)?oldid=3272317"
Community content is available under CC-BY-SA unless otherwise noted.