Biological research is a location on board Mothership Zeta. It contains two medium-sized chambers and is inhabited by both aliens and abominations.

There are several dead aliens lying around, which were probably killed by the escaped abominations. Their corpses can be looted for alien atomizers, disintegrators and other items.

The biological research is located between the experimentation lab and the bridge. The area contains two (sometimes three) abominations in the first chamber, an alien worker in the second and possibly a few hostile aliens.

In the second chamber are three transport matrices, one leading to the Observation Deck, one to the Bridge and one to the Death Ray Hub. The obervation deck transporter must be activated in order to allow the other survivors through. The teleporter to the bridge is shut down and the player character must go to the death ray hub to continue the mission.

Biological research appears only in the Fallout 3 add-on Mothership Zeta.

Sometimes you cannot go through the teleporters. [verified] 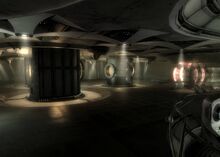