The biodiesel refinery is a building in the Mojave Wasteland in 2281. It is found in the northwestern part of Nellis Air Force Base, next to some yellow train carts and a small tower.

The location consists of a single room. At one end sits a large stack of fuel drums and to the right, a counter where a large amount of maize can be found. It is full of flammable fumes.

Inside are 102 pieces of maize, the highest quantity found in the game.

The biodiesel refinery appears only in Fallout: New Vegas. 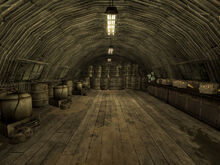