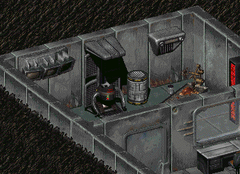 Bio med gel to the right of the bin, on the floor
“A jar of bio gel used in the biomedical field.”— Fallout 2 description

Bio med gel, biomedical gel, or biogel is designed to enhance the regeneration processes of organic tissue, and was used in the biomedical field as a healing agent before the Great War.

Many varieties of cyborganic life utilized organic brains that acted as organic CPUs, in order to achieve sentience, such as seen within Robobrains, humanoid brain bots, think tanks, and even within cyberdogs. Entities that utilized this form of organic intelligence generally used bio med gel as part of their internal repair and maintenance systems. The brains are held inside a container located where the skull or head should be and are suspended in pressurized bio med gel. Since organic brains are biological organisms and cannot be repaired mechanically, these special gel-filled reservoirs are used in order to repair tissue damage, as well as being used for maintaining mental functionality for long periods of time.

Preservation and replacement involve the bio med gel being "cooked" so as to clear up any contamination the gel may have sustained during its time in storage, needing reactivation, or "sizzling" to reactivate brain function.[1] Bio med gel can come in many colors, such as seen in yellow, blue, violet, green, white, red, and cyan,[2] although it is not known whether this affects anything in terms of functionality, or if the colors are purely aesthetic. Before the war it was evidently quite expensive, costing approximately $1000 per pint.[3]

Bio med gel has alternative medical capabilities outside of its use for transplanted organic brains, as bio gel can also be used to regenerate injuries to damaged limbs and organs, as well as preserve them. This was seen with General Clifton's eye, which had been regenerated perfectly, and was able to bypass a retinal scanner. One hundred and sixty-four years after its removal for treatment. An even better example of the bio med gel's longevity was on Private First Class Dobbs. Killed in battle he was taken to Sierra Army Depot VI and submerged in this gel in order to experiment with its regeneration effects on humans. Not only did it fully heal his injuries, but it also brought him back to life, then the gel acted as a form of cryonic stasis.

However, exposure to bio-med gel for too long a period can cause an adverse effect known as post-cryonic syndrome. Which causes patients to completely dissolve once removed from their stasis. Therefore it is safe to postulate that bio med gel is possible of keeping patients alive indefinitely. A final miracle of the bio-med gel is that, with proper manipulation of the composition of the gel, one can effectively project mental images and thoughts to other minds within a limited range, and could be applied to the battlefield and criminal interrogation operations, though the manipulation and suspension caused psychological abnormalities within those the gel was used upon.[4]

However, despite the preservation effects of bio-med gel, it can only keep tissue preserved for so long before corrosive degradation occurs.[5][6] This can be observed with many Robobrains that have gone haywire without having their brain CPUs replaced. This is also directly observable in Nothin' But a Hound Dog, where one's cyberdog companion Rex's brain has begun to degenerate and needs help finding a replacement. If a brain replacement is not found in time for a brain-assisted robot, the brain eventually dies ceasing the function of the machine.[7]

In the cancelled Van Buren, Boulder Dome was meant to be the inventors of bio med gel along with many other scientific breakthroughs.[8]

Bio med gel has only appeared as an item in Fallout 2, but has appeared in use by robobrains and other robots in every Fallout title since.