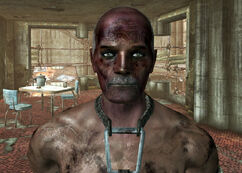 Bingo is one of the Pitt's raiders in the year 2277. He appears to be old and demented, only able to say his name.

One of the patrons of the Vertigo Bar and Grill, Bingo is an older Pitt Raider who can still remember the time of the Scourge, although he does not share this information with anybody. He is content to drink himself into oblivion, amassing a sizable beer collection.[1]

Bingo patrols The Pitt Downtown, and rarely does anything else.

Bingo is similar to Gary from Vault 108, as both only say their own names in various intonations. Although sometimes, when walking up to him, he will just say default passing words like other characters, as long as one does not initiate conversation with him. He will also say the usual threats and taunts if one decides to become hostile with him.

Bingo appears only in the Fallout 3 add-on The Pitt.

Retrieved from "https://fallout.fandom.com/wiki/Bingo_(The_Pitt)?oldid=3422450"
Community content is available under CC-BY-SA unless otherwise noted.