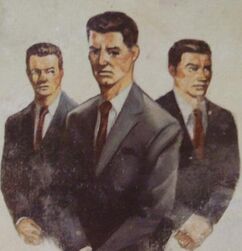 Bingo was the leader of the Mojave Boot-Riders in 2274.

Bingo led the Boot Riders, a nomadic tribe living in the Mojave Wasteland. During the NCR's early expansion into the Mojave area, he and his fellow tribe members were approached by 20 PDQ-88b Securitrons with Mr. House's offer to assist him in restoring Vegas. Bingo was against House's proposal and wanted the Boot Riders to stay nomadic, but one of the tribesmen, Benny, was intrigued by the offer and wanted to leave the old ways behind.[1]

Benny argued with Bingo about his stubbornness, so Bingo challenged him to a knife fight. Although Bingo was the strongest in the tribe, he was also the slowest and Benny took advantage of this. Once Bingo had taken a stab at Benny, Benny moved quickly and stabbed Bingo in the neck. Benny, winning his duel, then became the leader of the Boot Riders.[2] Benny subsequently followed House's instructions to settle down inside The Tops casino to take up their new identity as the Chairmen.[3]

Bingo is mentioned only in Fallout: New Vegas.

Retrieved from "https://fallout.fandom.com/wiki/Bingo_(Fallout:_New_Vegas)?oldid=3271224"
Community content is available under CC-BY-SA unless otherwise noted.