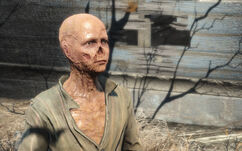 “Whoa, it's night time and it's still kinda bright! It was always pitch black in the fridge.”

Billy Peabody is a ghoul child living in the Commonwealth in 2287.

Billy is the son of Carol Peabody and Matt Peabody who hid in a refrigerator to protect himself from the bombs that dropped during the Great War. When Billy entered the fridge he became trapped due to its locking mechanism not featuring an interior handle. The fridge, in which Billy has been trapped for two hundred and ten years, is found next to the road between Neponset Park and University Point. Billy claims that he was playing with his friends before the bombs fell and when the sirens went off, he tried to find his way back home to his parents.

Kid in a Fridge: The Sole Survivor can help Billy return home to his unknowing ghoul parents. During the journey, the Sole Survivor will be approached by a slave dealer named Bullet where they will be given the option to sell Billy into slavery.

Billy Peabody appears only in Fallout 4.

Billy was voiced by one of Emil Pagliarulo's sons, though he is not credited for the role.[3]

Retrieved from "https://fallout.fandom.com/wiki/Billy_Peabody?oldid=3491503"
Community content is available under CC-BY-SA unless otherwise noted.