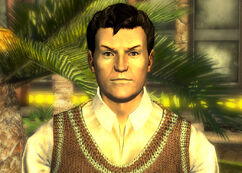 The Strip
The Aces (optional)

“Woof! If you're not the most sarcastic dame I ever met, your standards are so low they could use you at the Annual Gomorrah Saucy Limbo Competition. As the bar!”

Billy Knight is a street comedian living on the Strip in 2281. He stands outside of the Tops casino, next to a gate dividing the Strip.

Billy Knight is a longtime professional comedian who has clearly fallen on hard times. His act is made up of sardonic one-liners and observations about life and various personalities in New Vegas. It is implied that he was once a well-known comic, but his desperation causes him to sharply question his worth to a club.

Billy's jokes delivery style and jokes are a reference to those of Henny Youngman, the "King of One-Liners."[1]

Back to show biz at the Tops

Billy Knight - the "King of Zing!"
Add a photo to this gallery
Retrieved from "https://fallout.fandom.com/wiki/Billy_Knight?oldid=3401953"
Community content is available under CC-BY-SA unless otherwise noted.