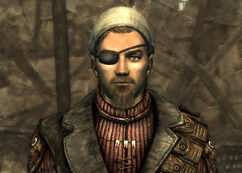 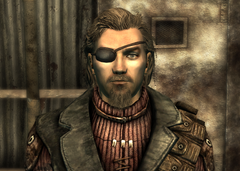 Billy without his head wrap

“Name's Billy Creel. You call me Billy, all right? I know Megaton looks more like a boneyard than a town, but it ain't all bad.”

Billy Creel is one of the inhabitants of Megaton in 2277.

Billy grew up foraging in the wasteland and was eventually hired on to protect caravans. Life was nothing but profit and survival until he came across Maggie. After killing the raiders who had massacred Maggie's parents, he took her under his wing. He brought Maggie to Megaton. When they arrived, he helped fend off a raider attack on the city and was given the house of a settler who was shot in the attack. There are a few around town who say that Billy was the one behind the bullet that bought him his place in Megaton.[1]

Colin Moriarty, on the other hand, has his own thoughts on Billy Creel. According to what can be found on his terminal, he suspects Billy Creel killed Maggie's parents himself and kept the girl as a "trophy."[2] Moriarty also describes him as a "Nuka-Cola swilling prick," which suggests that Billy does not drink alcohol.

Billy does not have any known biological family, but he considers Maggie to be his own daughter after rescuing her from raiders. Colin Moriarty is not very fond of him.

If the Lone Wanderer maintains a good Karma level, Billy is friendly with them.

Billy Creel appears only in Fallout 3.

Like all Megaton characters, Billy might go missing or turn up dead. See recovering missing NPC in Fallout 3 on how to resolve this issue. [verified]

Retrieved from "https://fallout.fandom.com/wiki/Billy_Creel?oldid=3432589"
Community content is available under CC-BY-SA unless otherwise noted.