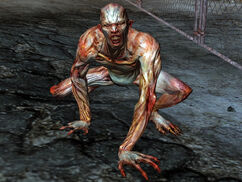 Billy (simply called "trog" in-game) is a trog living in the Pitt's steelyard in 2277.

Mentions of how trogs lose the mental capacity to reason, even with loved ones, are seen in Sandra's trog research entry on her research terminal.

Billy appears only in the Fallout 3 add-on The Pitt.

Retrieved from "https://fallout.fandom.com/wiki/Billy_(The_Pitt)?oldid=3348394"
Community content is available under CC-BY-SA unless otherwise noted.