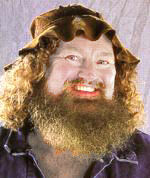 Billy-Bob is the leader of the Hoover Dam trogs in 2253.

He is an enormous man, with pasty white skin and shaggy hair and beard. He is also the father of Mary-Joe, but has no clue that she is hookin'. Billy-Bob just thinks Mary-Jo is spending far too much time hanging out with the waste-walkers (trog term for surface dwellers) and that she needs to come back to her kin. Should he find out she's a prostitute, he will destroy the Hoover generators and wage war at the Hoover citizenry from within.[1]

Billy-Bob was to appear only in Van Buren, the canceled Fallout 3 by Black Isle Studios.

Billy-Bob's concept design image is a cropped portrait of Hillbilly Jim, a professional wrestler active in the 1980s.

Retrieved from "https://fallout.fandom.com/wiki/Billy-Bob?oldid=3424720"
Community content is available under CC-BY-SA unless otherwise noted.