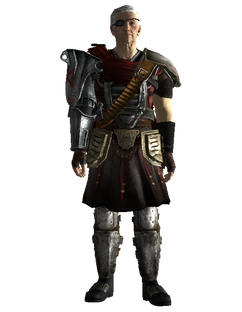 “And this road - has reached its end.”— Bill the tax collector with voice of Ulysses

Bill the tax collector is a character placeholder used to narrate the ending sections of the game in the Fallout: New Vegas add-on Lonesome Road.

He is graphically identical to Testacles the Debug Centurion.

Bill the tax collector is the narrator to the endgame cutscene of Lonesome Road, he serves a similar role to Ron the Narrator and can only be seen by using glitches or console commands.

Bill the tax collector appears only during the ending cutscenes of the Fallout: New Vegas add-on Lonesome Road.

Retrieved from "https://fallout.fandom.com/wiki/Bill_the_tax_collector?oldid=3214193"
Community content is available under CC-BY-SA unless otherwise noted.